When the NFL and CFL Played 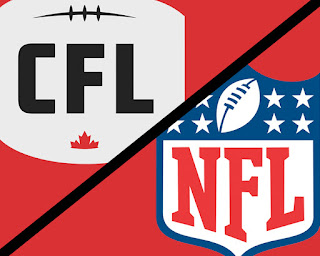 When it comes to football, the sport truly does not recognize borders, especially that one north of the United States.  The teams of the Canadian Football League (CFL) are, in many instances, almost as old as those of the United States.  In fact, the CFL and the NFL have peacefully coexisted for nearly 100 years, and though it may now be a much smaller league with minor league status, it is a league steeped in tradition. In fact, I would say that the CFL is much more respectful of its past and former players than those in the NFL.
For the last week, the major story has been the XFL and CFL and the possibility the leagues may align, partner or even merge. One of the questions asked by many is how do you play a game with different competing rules.  Well, there has been experimentation and in the year prior to launching of the American Football League, and in the year in which Chicago said goodbye to its oldest NFL team, the CFL and NFL began a series of exhibition games (the AFL would later play a game in 1961) in which its two elder teams took the field at old CNE (Exhibition) Stadium in Toronto, the site of the 1959 Grey Cup, for North American bragging rights. 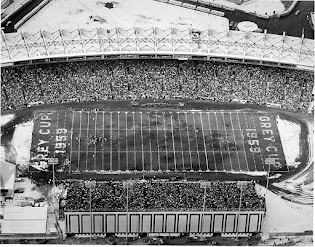 The date of the game was August 5, 1959, and, in anticipating the arrival of the Chicago Cardinals for the pre-season exhibition game against the CFL’s Toronto Argonauts on August 5, 1959, the Toronto Star‘s Jim Hunt asked the obvious question: “Argos against the Chicago Cardinals—the mismatch of the century or a football game?”
The Argos, who’d dominated the CFL for most of the early 20th Century, were now in the early years of what became known as "The Dark Ages." The league’s perennial bottom-feeders between 1953 and 1983, the Argos went nineteen years between Grey Cup appearances and thirty-one years between Grey Cup victories. As if to make up for their on-field futility, according to Jay Teitel’s The Argo Bounce (T.H. Best Printing Co. Ltd., 1982), the franchise simply tried to play with big league style by signing one big-money player after another. In this, the team seemed to reflect Toronto’s post-war insecurity and its ambition to prove itself a world class city. With the huge success of the 1959 exhibition game—with 27,770 fans in attendance, it was the largest crowd to watch football in Canada at that time—the Argos hosted similar exhibition games in 1960 and 1961.

The Canadian brand of football was still predominant in the hearts and minds of Torontonians. In the late 1950s, the CFL was a pillar of stability compared to the NFL, which had always been besieged by the greater popularity of college football and by rival leagues raiding its rosters for players and personnel. But by 1959, the NFL was beginning to shake off its bush league status and gain the television presence that would solidify its ascent as the dominant sports league in North America. So a showdown between the two leagues piqued the public’s interest.
Leading up to the 1959 game, Toronto’s bars and coffee houses were abuzz with debate over the merits of each league. Few gave the Argos much chance of beating the Cardinals. There was already a growing sentiment, as Ron Thomas made clear in The Star, that “Canadian football teams are inferior to those from below the border.” Despite the fact that the free flow of players between the two leagues showed that individuals could certainly succeed in either one, the handicaps suffered by CFL teams were too significant. Most notably, CFL players were smaller and usually played on both offense and defense, while NFL teams had the depth to field a roster with specialists at each position.
Some thought the hybrid rules being used in the exhibition game might minimize these advantages. Canadian restrictions on down field blocking were eliminated in favor of American-style play. Canadian kicking and returning rules would apply, thus eliminating the NFL’s fair catch rule. Playing on the larger Canadian field with only eleven players, instead of the CFL’s twelve, ensured the game would be a high-scoring shoot-out.

The game was a flashy opener for the brand new home of the Argos, CNE Stadium, which with little protection from the lake’s fierce wind, couldn't have been more different than the cozy bowl at Varsity Stadium. Yet before it acquired the “Mistake by the Lake” moniker, CNE Stadium was celebrated as a symbol of Toronto’s progress. Naturally, the game was front page news—but not for on-field action. Instead it was the massive traffic problems that drew the biggest headlines. Police called it the “worst traffic jam in the city’s history” as twelve thousand vehicles vied for the seven thousand parking spots on the Exhibition grounds.
On the field, the Argonauts surprised everyone by roaring out to a 13-1 lead. By racing to the line of scrimmage to quick-snap the ball on every down, the Argos caught the Cardinal defenders off guard. Quarterback Ronnie Knox thrived in the pass oriented “Argo Shift,” a formation designed to get five receivers down field quickly instead of four. Knox marched the Argos fifty yards down the field in four plays to connect with Dave Mann, a versatile former Cardinal receiver who also acted as the Argos punter, for a touchdown. Shortly afterwards, defensive star Bob Dehlinger intercepted a Cardinals pass and ran seventy yards down the field for another score.
Initially, it seemed that the weeks of training the Argonauts had gone through were paying off. The Cardinals, on the other hand, had only been in training camp for ten days. But their coach, Frank “Pop” Ivy—considered one of the sport’s greatest innovators—was intimately familiar with the Canadian game because he’d coached the Edmonton Eskimos to three straight Grey Cup victories in the mid-1950s.
Toronto assistant coach Steve Owen—who would be enshrined in the hall of fame for his long tenure as head coach of the New York Giants between 1930 and 1953—knew that the biggest obstacle for the Argonauts would be Chicago’s massive defensive line. At an average of 255 pounds, the Cardinal linemen outweighed their Argo counterparts by about twenty pounds. It was only a matter of time before this decisive size advantage wore down the Argos and turned the tide of the game. The Argonauts held the lead well into the second quarter when disaster struck.
The heart of the Argos defense, Don Caraway, broke his foot in a tackle. Without their leader, the Argos defense collapsed. The Cardinals won the game 55-26—one of the few bright spots in an otherwise abysmal season that saw them finish last in their NFL division. Three more first-string Argonauts were injured on the day, including the best center in the Canadian league, Norm Stoneburgh. After the game, these injuries, which ensured the team finished in fourth place in their division and out of the playoffs, led sportswriters and fans to question the wisdom of playing exhibitions against NFL teams.


Despite the loss, Argo team president Lew Hayman—once a coach of unparalleled success, now an unmitigated disaster in upper management—claimed that because of demand from fans there’d be more NFL exhibitions games. Globe and Mail columnist Milt Dunnell, however, felt the interest in the NFL was inflated because, much to the chagrin of season ticket holders, the Argos had included it as a mandatory addition to the season ticket package. For the most part, the press saw the Argos-NFL exhibition games as mere cash-grabs for a team willing to sacrifice a season’s fortunes for the sake of a big day at the box office.
In a 43-16 loss to the Steelers in 1960, the biggest story pitted hall of fame quarterback Bobby Layne against Tobin Rote, the Argos’ high-priced rising star, who’d stolen Layne’s starting job in Detroit and led the Lions to the 1957 NFL Championship. Over the course of the 1960 CFL season, Rote led the league in every passing category and took the Argos to within a hair of the Grey Cup, but on this afternoon, he limped off the field with an injury. Layne picked the Argos’ secondary apart and Steeler running back Tom “The Bomb” Tracy—himself a castoff from the CFL—ran circles around Argo defenders. Sportswriter Tony Proudfoot called the loss humiliating. In The Star, Jim Hunt called it a “debacle” and added that “the score flattered the local heroes.” 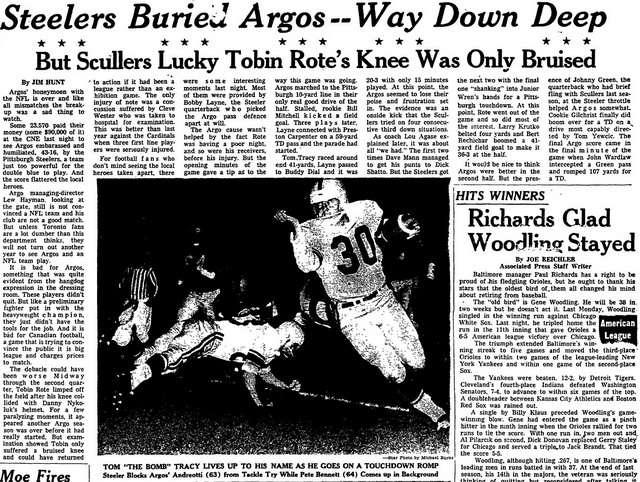 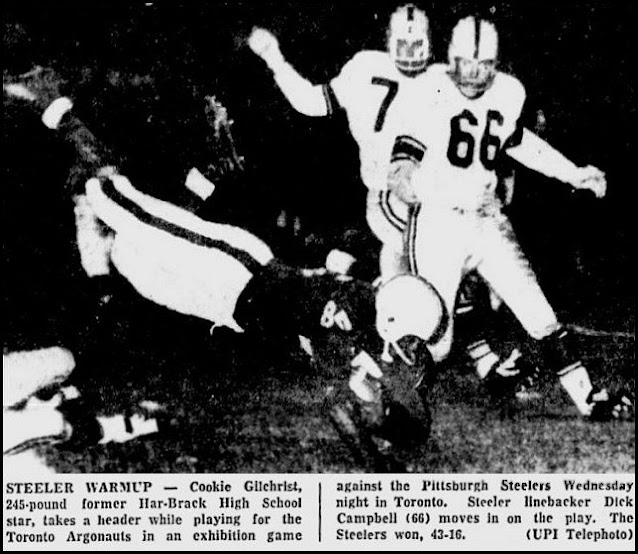 When the now–St. Louis Cardinals returned to Toronto on August 2, 1961, the game once again drew at the box office but disappointed on the field. Everyone wanted to see CFL superstar Sam “The Rifle” Etcheverry make his debut as the Cardinals quarterback. But he was injured and fans were instead treated to a sloppy defensive showdown. The Argos kept former Heisman Trophy-winner John David Crow to only seven rushing yards for the entire game but sputtered themselves and actually lost 22 yards on the ground.
The only real on-field drama was provided by Nobby Wirkowski. Once the quarterback hero of the 1952 Grey Cup, Wirkowski was now an assistant coach with the Argos, calling down plays to the bench from the press box. In the version of the story Wirkowski tells—there are numerous other contradictory ones—head coach Lou Agase approached him at half time:
Tobin [Rote] and [backup quarterback] John Henry Jackson had stunk out the joint in the first half. God, they were awful! Lou said to me ‘we have to put on some type of show for the fans. Can you suit up and go out there?’ I was wearing slacks and a shirt and hadn’t even practiced that week! I said ‘okay’ and suited up.
Just when it seemed he was getting the Argo offense on track, Wirkowski was tackled by an enormous Cardinal lineman. Falling awkwardly, he destroyed his knee and never played again. The final score, 36-7 for St. Louis, was another lopsided result. 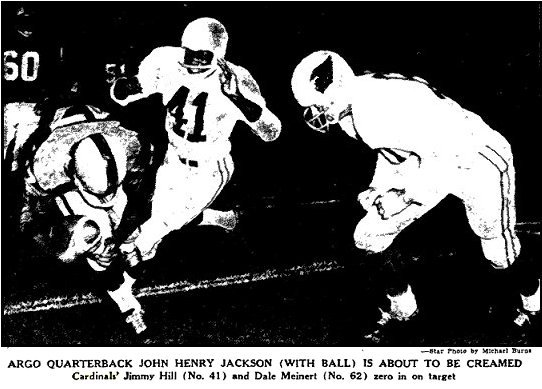 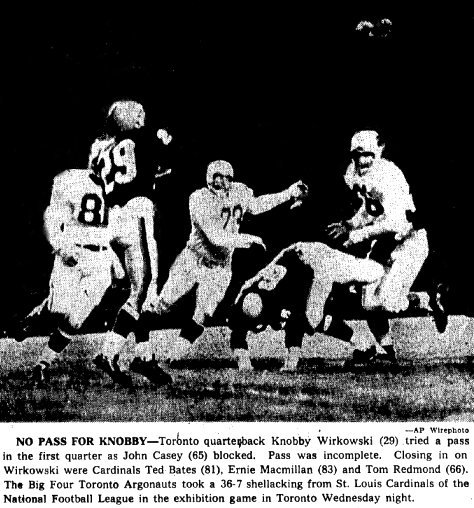 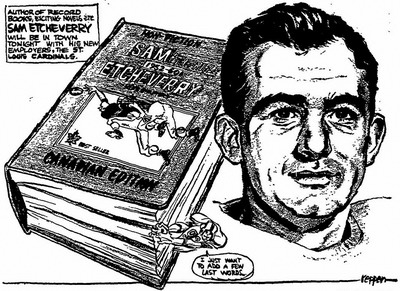 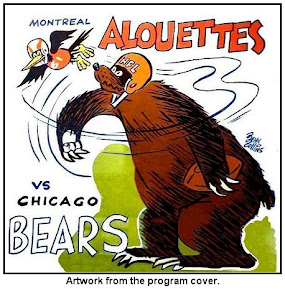 By this time, other CFL teams were cashing in on the novelty of playing American teams. The Montreal Alouettes lost to the Chicago Bears, while the Hamilton Tiger-Cats succeeded in beating the laughing stock of the AFL, the Buffalo Bills. The press, however, remained highly critical, arguing that staging exhibitions against the bigger NFL teams did a disservice to, even cheapened, the Canadian game. Jim Hunt compared the Argos to “a preliminary fighter put in with the heavyweight champion”; “they just didn't have the tools for the job.”
For much of The Dark Ages, the Argos weren't willing to embrace that the far-reaching yet subtle rule differences in the Canadian game not only created a different style of play from that south of the border, but created a completely different sport. Instead, the team too frequently tried to contort the Canadian game into something it wasn't and in their strident efforts to appear “big league”—perfectly exemplified in the exhibitions against NFL teams—made themselves appear anything but.
However, with that said, the CFL is a league unto its own, and the style and caliber of play cannot be truly compared to that of that played in the United States, for the Canadian game is more wide open and faster.  The CFL has a great tradition, and while though it may not be a "major league," it is a major Canadian one in which Americans have played a large role in shaping its heritage and identity as one unique than from that played by the NFL.